THE VERSATILITY OF THE VALLHUND 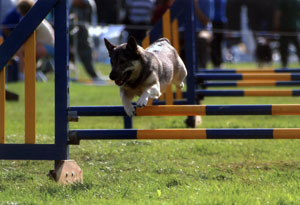 Agility is fun and the dogs enjoy it. It is something I have always been interested in. In 2004 I started with my 2 Labradors who I never competed with as I was doing it as a hobby. Then in 2006 along came Star and when he was 14 months I started agility with him. He was easy to train, our main obstacle was the weave poles. Then I got flame and started to train her in agility, this has certainly make her more confident in herself.

Agility consists of jumps, pipe tunnel, tyre, collapsible tunnel, long jump, weave poles, spread jump, A frame, dog walk and see-saw. The last three obstacles have a contact point at the start and end which the dog needs to touch with at least one paw, otherwise you will get faults in a show.

We train indoors and outdoors in the summer which gets the dogs used to both environments ready for the  shows. You need to have the dog measured when you go to your first show. You will be given a record book with his permanent jump height in. 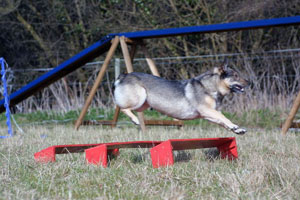 When we first started he went over low jumps and the pope tunnel. As he progressed we were introduced to the other equipment with the see-saw being the last, as some dogs are frightened by it to start off with.

The weave poles were the most difficult, but he got there in the end! My dogs like the agility classes better than just jumping classes. Steeplechase which is only jumps and tunnels they love!

Our first show was a 'UK Agility' show. At 16 months you can do the nursery classes (these don't have a typre, see-saw, weaves or spread jump) and steeple-chase. At 18 months old, he was able to compete in all classes. 'UK Agility' also does agility 'games' – such as gamblers, snooker, time / fault and out, power and speed etc. The only games my dogs have not done is snooker. With 'The Kennel Club' agility competitions your dog has to be 18 months old to compete. 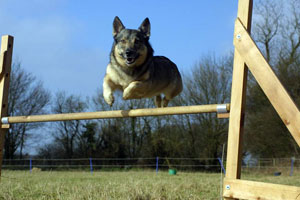 Most of our shows are in the Spring and Summer but there are also some winter shows – very good but early starts in the dark!

Like all competitions, you need to have confidence in your dog as well as yourself.